I like how Sita openly speaks her mind. I think that she has grown to be one of my favorite characters. I don't often see Rama as anything other than utter perfection, but the story opened up describing Sita's distaste for Rama's speech. She even cried because of it, claiming he spoke 'roughly and unkindly'

A lot of the Ramayana is a little confusing to me, but from what i am getting from this story, it seems like Rama has found out Sita is no longer virtuous, but it doesn't look like she consented to lose her virtue. Despite all of that, Rama was going to have her killed! (Boooo). Luckily for Sita, Agni protected her and spoke in her favor.

In the end, It sounded like Rama sending Sita to death wasn't something he wanted  to do, but rather something he felt like he needed to do for the good of his people. 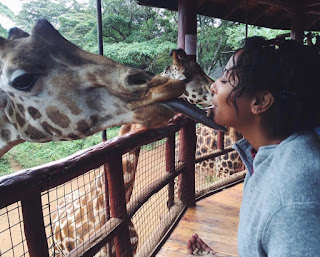 Who's that girl? Introduction to an American-Ethiopian Globetrotter.

My name is Ida Sukar, third year biochem major.  I actually transferred here in Fall 2018, so this is really only my third semester at OU.  I love chemistry (its really more of a love/hate relationship but definitely more emphasis on the love). I started taking it back in my Sophomore year of high school, so this marks my 5th year taking chemistry courses!

Just for funsies, my last name translates to sugar in Gey Sinan, a dialect of Amharic (the national language of Ethiopia). Both of my parents came to the states in the 80's for school and decided to stay and start a family.

I hope to one day work as a pediatrician. I've been really into oncology, and am looking into that specialty, but anything with kiddo's will suffice. I'm happy to say that I am on the board of Oklahoma Children's Cancer Association. I only recently joined but I LOVE what this organization stands for and it has definitely deepened the roots I have for my interest in oncology.

here is a link to my storybook, enjoy! :) 
It felt like I have nothing left. What am I without my love, Rama? How could he? How could he speak upon my name in this way? I couldn't hold the tears back.

Tears falling from my eyes, I finally speak. "How? How could you possibly think this way?"

Emotionlessly, he spoke quickly: "Did you not live so long with my enemy?"

And so, I had to let him go in my heart. I cannot long for someone who didn't believe in me. I cannot love someone when it is not reciprocated equally and unequivocally. We were not what we used to be.

"I was held against my will, Rama!" I couldn't keep quiet at this iodicy. My voice got louder and louder with each time I spoke. "I was scared, I was kidnapped! How can anyone think I was living in harmony, at peace within? I can assure you I wasn't"

And that's when it happened. Rama signaled to the guards to grab me from behind.  They took me to the pyre and I tried, I trie…